The Megaminx is a special puzzle to me because it is the first one that I learned how to solve by myself in its entirety. What I mean is that I worked out a method to solve the puzzle without any tutorial, which was a big deal for me.

The only thing I really knew about Megaminx was that it can be solved in a similar way to a 3x3 Rubik's cube. With that in mind, I started to solve it by making a 'star' on one side, and then inserting the corner pieces. Next, I moved onto the 'second' layer, and then I hit my first stump. What I managed was to solve the next section as one 'layer' by alternating edge and corner pieces; doing them one at a time, one after another, ending with a corner piece. Next is just the next layer of edges, and then the last layer. The last layer gave me some problems, but with a couple days of on and off work on it I figured out how to apply 3x3 algorithms to manage the last layer. While my method may not be terribly robust, I don't have any interest in speedsolving Megaminx, and so I will take my satisfaction in solving it and be done. 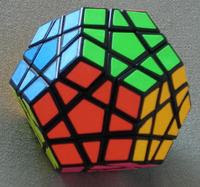 I haven't stopped there, however. I decided to move onto something bigger, and I purchased a Master Kilominx. An excellent puzzle after it was lubricated, I enjoyed the challenges it offered as an even layered minx puzzle. I was lucky with my first solve and did not end with parity, but the second time, there was parity, and i resorted to looking up an algorithm for the case. However, I did enjoy solving this puzzle as well, and it's one I do the odd time, so the parity is not a big deal.

I find minx puzzles to be an interesting challenge, and I plan to purchase a Gigaminx in the future. Although I do not want to speedsolve minx puzzles, I think they look awesome and are fun to play with, and of course are a great addition to a collection.

This work is licensed under a Creative Commons Attribution-NonCommercial-NoDerivs 3.0 Unported License.