Mathematics of the Rubik's Cube

A very important fact about myself is that I am a very maths based person. It is a language that I can go about my daily life with in total comfort. That's certainly something that very few people are able to say! Of course, my thought process lead me one day to find out about the maths that surround the Rubik's Cube. 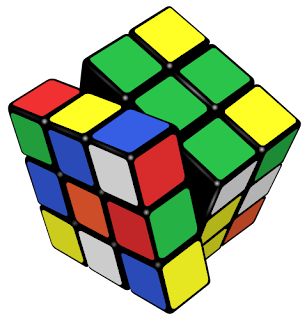 To determine the number of positions, one needs to consider the different pieces and how they can be arranged. A standard Rubik's Cube has eight individual corner pieces, each of which has three different orientations. There are also twelve individual edge pieces, each of which has 2 different orientations. Since the positions of the corners and edges will depend o one another, the final position of each is disregarded, giving the number of positions as 8!x3^7x(12!/2)x2^11, or

possible permutations. Say that you had one standard 57mmx57mmx57mm cube for each configuration. You could cover the surface of the earth 275 times over. Now that's big.

What is interesting is that by physically moving pieces into places they do not typically belong, one can change the 'orbit' that the cube is in. If you disregarded the fact that not every piece can reach its full number of positions, there are actually about 519 quintillion possible positions, twelve times as many as there are just by turning the cube. If one corner was rotated, or one edge flipped, or two edges or two corners switched, the cube becomes unsolvable because the solved position can no longer be reached by ordinary turns. Also, these number do not consider the centre pieces, since they do not normally have any markings on them. But with a supercube (future blog?) the number of permutations goes even higher.

For more info, check out the following:

Numberphile on the Rubik's Cube:
http://www.youtube.com/watch?v=QV9k6dRQQe4

RedKB on Why is the Rubik's Cube so hard?
http://www.youtube.com/watch?v=QV9k6dRQQe4
Posted by Unknown at 9:44 pm 1 comment:

This work is licensed under a Creative Commons Attribution-NonCommercial-NoDerivs 3.0 Unported License.